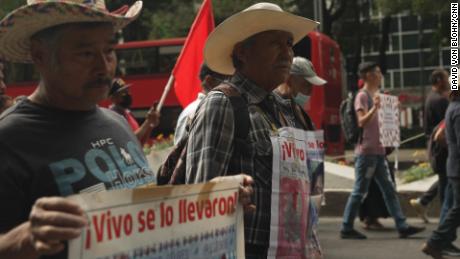 Carrying posters with photos of their sons and calling for justice, relatives of the missing told CNN they hoped the report might finally result in criminal punishments for those responsible.

The renewed calls for justice come after a government truth commission presented its bombshell report on August 18, which concluded that the students who vanished were victims of « state sponsored crime. »

Finding the truth about what happened to the 43 students was one of Mexican President Andres Manuel Lopez Obrador’s 100 campaign promises during the presidential election in July 2018. The renewed inquiry under his presidency linked federal, state and local authorities — many of them unnamed — to « …the disappearance and execution of the students. »

It also said that an order had been given to carry out the 2014 atrocity, but the report stopped short of naming who gave the order.

On September 26, 2014, the college-aged students were en route to Mexico City, commemorating the anniversary of the 1968 Tlatelolco massacre, where government forces killed as many as 300 student demonstrators.

While traveling through the southwestern city of Iguala, the Ayotzinapa students were intercepted by local police and federal military forces. Exactly what happened after remains unknown, since most of the missing students were never found. But bullet-riddled buses were later seen in the city’s streets with shattered windows and blood. Survivors from the original group of 100 said their buses had also been stopped by armed police officers and soldiers who suddenly opened fire.

No one has ever been convicted in relation to the students’ disappearance. But the new report so far has led to more than 80 arrest warrants being issued against members of Mexico’s military, police and cartels.

Mexico’s former attorney general Jesús Murillo Karam — the very man who previously led the government’s investigation into the disappearance — is among the arrested on allegations including forced disappearance and torture.

Murillo Karam’s defense argued the crimes attributed to his client were not supported since they were backed by statements and press conferences given at the time by the former attorney on the case and were « taken out of context. »

Still, some parents of the missing refuse to believe their children are dead, citing a lack of concrete evidence.

« [The officials] don’t say anything, » Don Margarito Guerrero said. « That’s why we need to continue fighting. We will not back down until we know something. » His 21-year-old son, Jhosivani Guerrero, along with two of his nephews are among the 43 disappeared. Guerrero says his son, the youngest of his children, worked hard selling water to help earn money and enjoyed studying.

Earlier this month, Mexico’s top human rights official Alejandro Encinas revealed that six of the students were « allegedly held alive for several days in what they call ‘La Bodega Vieja’ and from there were turned over to [a military] colonel…. »

Encinas said that, according to the report, the Army officer gave the order to execute the students held captive in the warehouse.

« It is presumed that six of the students remained alive for four days after the events and that they were killed and disappeared…, » he added.

But parents like Maximino Hernandez Cruz, who grasps for the rapidly fading memories of his 19-year-old son Carlos, want justice.

After eight years his emotions are subdued; his tears have nearly run dry, leaving behind a near permanent fatigue in his eyes.

« We want those responsible to be punished…. They need to pay for what they did to our children, » Hernandez Cruz said. « We are suffering. We are dead inside. »

Before traveling into Mexico City for their monthly protests, the parents of the 43 disappeared first meet in the small farming town of Ayotzinapa. They gather at the school where their sons lived, worked and studied. Photos and murals, reminders of « the 43 », surround the sprawling rural campus.

« It reminds you that they were also part of Ayotzinapa, » a current student, who wished only to be identified as « Cesar », told us as he shared how the disappearance of the 43 has impacted fellow students and teachers. « They were our classmates, and even though they’re the ones who disappeared, we know that it could happen to any one of us. »

Under the shelter of a thin metal roof and exposed walls, placed on what was once a basketball court, are 43 empty classroom chairs with photos of the disappeared taped to each one. Cesar calls it a « sacred space », one in which the current Ayotzinapa students respect by not playing sports or loud music nearby.

« As farmers, we don’t have a lot of resources, » Maximino Hernandez Cruz said. He said he had been grateful to receive a free education for his son, coupled with room and board.

« We didn’t have enough money to send him to a private school. That’s why he attended Escuela Normal Rural. They gave the students shelter, food, everything they wanted, » Hernandez Cruz said.

The school is also known to inspire activism, encouraging students to question the status quo and hold those in power accountable.

« We really need to raise our voices so that the people listen to us, listen to our demands, our needs, because as students if we don’t raise our voices, they don’t truly pay attention to us, » one of the students said, who asked to be identified under a pseudonym, « Alexander Mora ».

The 20-year-old described the importance of the school’s reach into underserved communities, like those in the Mexican state of Guerrero.

« We have to foster people of all backgrounds to be represented so that they can help change society for a better future…, » Mora said.

Infiltrated by ‘corruption and cartel violence’

The journey to Mexico City from Ayotzinapa is a roughly 5-hour drive through winding, mountainous roads through the Mexican state of Guerrero. Lush greenery masks what locals describe as a place infiltrated by corruption and cartel violence.

The US State Department warns American citizens against traveling to the state due to crime and kidnappings. « Armed groups operate independently of the government in many areas of Guerrero, » it says. « Members of these groups frequently maintain roadblocks and may use violence towards travellers. »

Loved ones of the missing 43, now dedicated to a life of activism, are unfazed when driving through the state as part of their now regular commute to the capital, where they collectively march for justice.

Each month, they board buses to Mexico City to protest — a route eerily similar to their sons’ unfinished journey in 2014.

« If we just let it go there won’t be justice, » Don Margarito Guerrero said. « … The same thing will happen again and again…. That’s why we’re fighting. »

They cannot travel far in Guerrero without spotting graffiti and photos that reference either « the 43 » or the more than 100,000 people estimated to have disappeared in Mexico since the 1960’s.

Theirs is just a sample of the suffering spread across the country.

In Mexico, families of the disappeared have formed more than 130 « search collectives » to investigate disappearances on their own, according to Human Rights Watch.

And according to a 2022 report by the International Committee of the Red Cross, 40,000 relatives of people who have gone missing in Mexico over the years have taken part in training sessions in the search for their loved ones.

Still, there are moments in which Guerrero’s grief is clouded by a hopeful memory.

« I remember how he’d always show up somewhere, wearing his sweater over his shoulder, » Guerrero says with a worn smile. « Sometimes he tells me he’s coming, but when? »

CNN’s Marlon Sorto and Karina Maciel contributed to this report.