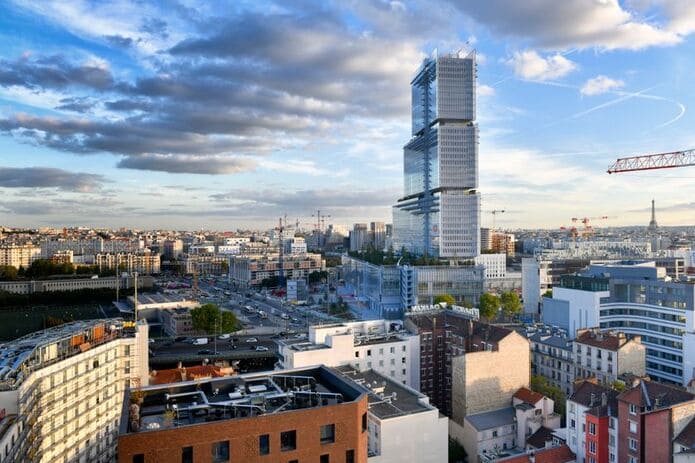 In 2007, Justice’s epic debut album was not as it first seemed, but it was everything we needed.

Opening track ‘Genesis’ does a bang up job of setting a magnificently foreboding scene.

With its distorted bass trombones and stalking ominous timpani, you’d be forgiven for thinking you were listening to a cult 70s sci fi soundtrack, until the lashing, warping synthesizers and clipped bass grooves drop in to set the song in terrifying motion.

‘Genesis’ leads straight into ‘Let There Be Light’, all cymbals, distressed sirens and fuzzy bass.

It’s tempting to think with the overdriven energy, the chaotic melange of textures and sounds, the religious song titles and the fact that the record bears an illuminated cross rising out of a depth of darkness that the French duo were playing out a broader evangelical theme across this album.

The duo’s Xavier de Rosnay was quick to nip that line of thinking in the bud.

« These are really simple ideas. We’re not like a conceptual musician and I hate the ‘concept’ and things, » he explained to Zan Rowe in 2007.

« The global idea for the album was to make like some kind of a ‘disco opera’, like something really dramatic and operatic, which is alternating constantly [between] really hard moments and really smooth moments, like real life moments and some more darker stuff. »

Listen to Justice’s Cross on Classic Albums above:

Prior to going global, De Rosnay, together with creative partner Gaspard Auge, had drummed up huge anticipation behind their many collaborations and remixes for the likes of Simian, Britney, Daft Punk, N.E.R.D to name a few.

« We were just used to making music for like a five-minute format, » De Rosnay told Zan.

Their approach was to leave nothing to chance.

« We went into [recording in] February 2006 with all the ideas of the album set, » De Rosnay said. « We just set up a maximum of things like duration, number of tracks, and then find found one idea for each track.

« And so the music, I think like every two minutes, it’s always switching into something really different. But this is something we needed to [keep] the excitement of making like such a long format. »

Over the album’s 12 tracks, the momentum barely wanes with the restless shifting from chunky bassy beats to stabbing strings and belching synths that cut like machetes through dense forestation, escalating aggressively before descending into gentle piano lines.

It’s all part of the French duo’s vision for the electrifying terrain meticulously mapped out across their debut.

« In Justice, we don’t do anything by accident music wise, » De Rosnay said.

You’d think with an album with beats and synths that hit with this much conviction, that De Rosnay and Auge must have tested out the tracks in clubs prior to committing them to tape. You’d be wrong.

« Since we started four years ago, the statement for Justice was never to make dancefloor music, » De Rosnay said.

« We are into club music, but our main concern is just to make music that we can listen to in the daytime at home.

« Okay, some of the tracks are kind of club friendly. But this is something we first want to be able to listen to like at home, in the car, in the bus. You know, like, just daily music you know? »

With it’s naïve, off kilter charm, breakout hit ‘D.A.N.C.E’ is somewhat misleading too.

Unlike the micro-sampling the duo employed across much of the rest of the album, the young voices heard on Justice’s huge hit aren’t sampled at all.

« Before we made that track, we did a lot of very distorted tracks, and we just wanted at this time to make something really different from what we did before, something that is more pop, » De Rosnay explained.

« When the song was written, it was kind of hard for us because it was the first time we had written lyrics. And we are French people, and to write the lyrics in English is not that easy for French people.

« Then we went to London to make auditions to create a sort of choir, which is made of eight kids and the lead singer, who is 18 years old. We did two rehearsals with them, then we got the demo and went back to Paris and produced the track.

« I think this is the first time we used like a kind of classic process to make music. »

Fifteen years on, Justice’s influence on EDM and across a swathe of contemporary producers is undeniable.

In Cross, they managed to craft a heady intersection between heaviness, noisiness, funkiness, dramatics, sci fi kitsch and pop melodics giving the ravers every reason to rock, and the rockers compelling reason to dance, even if dancing was an unintended by-product.

Delve into the finest records of our time in Classic Albums, each week on Double J.